Rural populations majorily are prone to face water, sanitation, and hygiene-related health issues. Although government agencies are providing the infrastructural support to improve sanitation condition, but these services are not reached to the rural community. Lack of knowledge, infrastructure and resources somehow contributes an unappealing living condition.

In order to boost the rural community on the threats of unsanitary condition, a sanitation drive was organized on  the occasion of Gandhi Jayanti on October 02, 2017  in 5 villages of Mohammad Pur Deomal block, Kotwdar. For the drive 48 adolescent girl and 20 boys participated. The objective of the drive was to share the importance of having a clean and safe environment.

The sanitation drive was organized after a series of dialogue with the adolescent group, after which the boys were also involved. The girls themselves took the initiatives of arranging grooms, spade, pipe and gloves.

This noble act of adolescents was supported by the community members. The community has ensured timely cleaning of its surroundings, community place and environment.

SAKHI project has been playing a vital role in bringing some positive changes in situations especially for adolescent girls of Ajmer district. Started in Oct 2017; the project is working intensively on issues related to health, education and life -skills for adolescent girls in 10 villages of Shrinagar block of the district and “Health Sakhi” has become the change agent. Health Sakhi is a volunteer group of adolescent girls. Health Sakhi is proactive. Educated members of the group are selected to support that peers and the community in tackling different health issues.

Ten Health Sakhis were appointed and were given rigorous training on health. They also learned about the available govt. schemes and programs along with understanding body changes, food and nutrition requirement, good practices of health & hygiene in adolescents and in general. A first aid kit (box) was provided together with basic knowledge. They were also introduced to and linked up with local health personnel like ANM, Anganwadi Workers, and PHC Doctors etc. to acquire their support in field intervention.

These trained Health Sakhis are now reaching out to 500 to 600 community members every month and rendering service. They support them to get sanitary pads to girls, vaccination and counselling in health issues, family planning aid and referral to govt. hospitals and health centres. They also assist health personnel during vaccination drive, campaigns of Swatchh Bharat Mission, Polio drop etc. The community acknowledges their support and respects them like other health personnel in the village. They now are moving towards making their career in community health care.Thus SAKHI project is evolving health volunteers for building a healthy society.

MARCHING TOWARDS THE AIM OF GROUP FORMATION

Adolescent girls’ group was formed in the target village Dalelganj, 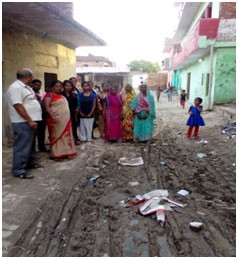 Khalilabad of Sant Kabir Nagar in the month of October 2017. Through regular monthly meetings, AGs of the group were given information regarding their rights, entitlements and duties towards their society.

In the monthly meeting of January 2018, as group work they decided to celebrate Republic day and invite Gram Pradhan as the chief guest in the celebration. The group decided to write an application for reconstruction of the road (Approx. 500m) to Mrs. Poonam (Gram Pradhan, Dalelganj). She gave assurance for the reconstruction of road.

AGs are hopeful to get the result in the coming month.

Adolescent girls are subjected to various gender based inequalities. They are often forced into household work and sibling care, school dropout and low education attainment, child marriage and early child bearing, trafficking for sexual exploitation, risk of HIV/ AIDS and discrimination even in terms of nutrition and food.

The vulnerability of adolescent girls and their specific needs points towards an urgent need of spreading awareness, enhancing school enrolment, raising the age at marriage and first birth, meeting nutritional needs and empowering and capacity building of adolescent girls so that they can deal with the challenges of life in more effective way.

This requires combined efforts of different sections of society and all the stakeholders working for the empowerment of adolescent girls. Government in coordination with NGOs can address the needs of adolescent girls by working for their protection from harmful traditional practices including early marriage leading to teenage pregnancy and vulnerability to sexually transmitted diseases, lack of education , sexual exploitation and abuse and for the development of life skills and self-esteem and SAKHI project supported by UKSVK implemented in 10 villages working with more than 1000 AGs of Khalilabad district of Sant Kabir Nagar in the  State of Uttar Pradesh aims the same.

SAKHI project supported focus AGs to get information on coordination and networking with govt. officials through meetings and capacity building sessions on the existing government schemes, the procedure to take benefits from the governmental schemes and how to share their problems with the stakeholders. 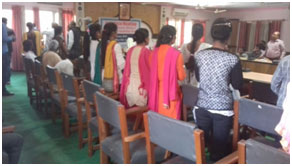 In the same line, focus AGs from the area supported 60 Person with Disabilities (including the 08 parents of AGs) to share their problems and challenges through an interface meeting conducted under the flagship of PGSS, Gorakhpur with Mr. Markandae Shahi (DM, Sant Kabir Nagar) and other relevant government  Officials. The present 08 parents of AGs were sanctioned support for the toilet construction under Swachh Bharat Scheme; this has positively influenced mindset of other AGG members as well as parents of AGs. The parents and AGs thank UKSVK, Agra for helping them and AGs for getting the benefit.

AGs from the target area are transmitting the change among the Adolescent Girls’ Groups formed under the project and have formed a strong network with government officials after attending the interface meeting that can facilitate the exchange of information, catalyze life-changing connections, and help AGs to embrace their collective power.

A training program on FIR was organized on January 21, 2018 in which 130 AGs from 12 villages participated. Mrs. Prachi Singh and Saritha, constables gave the training on FIR explaining the following:

Explaining Domestic violence, they said that if any woman is subjected to domestic violence the same can be reported on 103, 1090 women’s helpline, and 1098 child helpline.

For any communal problem in community or village, one can raise the complaints on the following common numbers 9454403643, 9454403644 (only for Gursarai –Jhansi). The Police constables also shared the process of writing a complaint/ report. If any police personnel is not receiving or accepting the written complaint then they can approach the higher authorities and register their complaint.

The session was quiet interactive  as in the AGs clarified their doubts and responded without fear and hesitation.

Thereafter on 6th March, 2018 a workshop was organized. It was facilitated by Gursarai Station Officer, Mr. Avad Narayan  Pandey. The resource person shared the importance of women empowerment to counteract atrocities against women. Then Mr. Avad Narayan put a few questions to the adolescent girls, to which Julli, Roopa, Saroj and Neha gave adequate answers. The S.O was so impressed with their promptness and eloquence, he encouraged them as POWER ANGELS and selected them as special police officers and provided them with a special Identification Card. These girls have direct access to the police station and can raise the complaints as and when required. 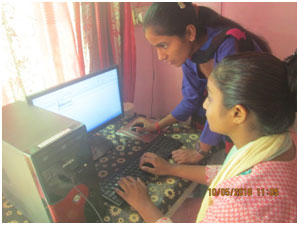 Under Sakhi project, a “Saraswati Adolescent group” was formed in village Nagla, Jamalpur. In this Adolescent group, there are 20 girls. Initially, in the presence of their parents, the girls were oriented on the project, its Goal, purpose and activities. Thereafter formation of an adolescent group was succeeded wherein some of the girls decided to learn basic computer course.

Her keen involvement in computer study was appreciated by her father who from his meager savings procured purchased a new computer for the daughter.  Her hard work and passion have yielded; today Shalu is engaged as a tutor at the Om Computer Centre and earning some livelihood.

Km. Shalu acknowledges MSS for the opportunity provided. She is actively involved in all group work activates and is an inspiration for other adolescent girls.